2016 is progressing as planned and most projects are up to speed again after the holiday season. Deadlines are approaching and a lot of testing is taking place. It feels familiar and safe, but wait, something feels a bit different this year.

That's because 2016 is a leap year. One of those years with one more day in the calendar. A full extra day for testing. Oh joy. However that extra day should also lead to a bit of scrutiny for you, dear tester, test manager, QA-specialist or whatever title that allows you to spend most of your time on testing. 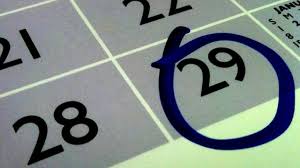 Remember last leap year? 2012. Cloud was the perhaps most hyped field within IT. Microsoft had just spent the previous years pushing Azure to a lot of strategic customers across the entire planet when disaster struck. This of course prompted a lot of jokes, within my organisation the joke was "Office 364" for some time. It probably also meant that Microsoft had a lot of fan mail from various lawyers.

To Microsoft this was a PR disaster because it was felt by so many end users in so many different places at the same time. This of course coupled with Microsoft promising that it was safe to move business critical platforms to the Cloud. Well, only if it was a "normal" year.

Leap year bugs are a problem since the root cause can be difficult to spot before the problem occurs real life. It's one of those side effects to a side effect. So try to take a look at your test plans? You plan to go live with your project during February - then panic a bit. Even if you have releases after the 29th do a little brain storm to find out if that extra day will affect any functionality you have in your project scope - like end of month/quarter/year. Or simply just try to figure out what will happen this year on the 28th and 29th of February, and on the 1st of March. And whether end-of-March will be affected.

That extra day in February is so nice since it is a free extra day in most project plans, but it will slap you in your face unless you test for it and know that everything works according specification or assumption. Wiki has a short list of known leap year bugs for inspiration to get you started.

If you don't remember what you've done for the past 4 years in terms of development and testing, have a cup of coffee with your favorite friend - the portfolio manager - and ask if she has a list of projects that have gone live in that period. Or maybe the deployment manager, or Devops. Actually, right now might a be a good time for a few cups of productive coffee. All in the name of defect prevention.
Posted by mikkel at 04:32